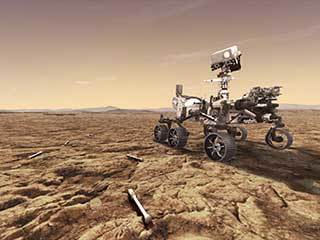 NASA has released a historic selfie shot on April 6 aboard the Perseverance rover. On the Martian surface, the photograph was captured next to the Ingenuity copter. The image was captured using a camera named WATSON, which was mounted on the end of the robot’s arm. Surprisingly, the final photograph published by NASA did not include the robotic arm in the snap.

Further, NASA has detailed how the difficult accomplishment was accomplished. According to the space agency, the rover captured 62 separate photos that were then stitched together to form a single selfie. Furthermore, because the space agency utilised numerous pictures, they were able to remove the robotic arm from the final snap. NASA examines the selfies to assess the rover’s wear and tear.

NASA’s Jet Propulsion Laboratory released a video depicting the process in which Perseverance captured the 62 separate photos with its WATSON camera. The sound of the robotic arm twisting and moving to snap the photos is included in the video. Vandi Verma, Perseverance’s Chief Engineer for Robotic Operations, discussed the difference between a human selfie and a rover selfie.

She said that even with the robotic arm fully extended, the camera was unable to catch the entire rover in a single shot. This is because the WATSON camera is intended to take close-up detailed pictures for scientific study. To address the issue, scientists captured several pictures and then stitched them together to create the final image.

Sunaina - September 28, 2021 0
Sonos and Ikea officially unveiled the second-generation Symfonisk table light speaker today. The device was originally rumoured to be in the works by The...